This Food-to-Fuel (F2F) project produces heating oil by starting with waste greases and oils (from restaurants and food processing facilities) and separating the oil from the water. Residuals from that process, along with food waste and municipal sludge, are anaerobically digested in a 1.23 million-gallon continuously-stirred-tank reactor (CSTR).

This system is capable of processing 50,000 gallons/day of grease trap and food processing waste rich in oils. The oil is extracted from the waste stream through steam extraction. In addition to fueling the boiler creating the steam, the oil is used to heat the buildings on the Kline’s campus. The company has not purchased petroleum oil for heating for the past three years.

Incoming wastes are deposited in four underground tanks located in the processing building. Contents are then metered into the digester, which is adjacent to the existing tank containment. Digestate is handled through Kline’s existing Sequence Batch Reactor (SBR) system. Sludge from the SBR is lime-stabilized and processed through plate-and-frame presses, creating Class B biosolids that are land applied at approved farm sites in the local county. Effluent is discharged to the local wastewater plant for additional treatment. 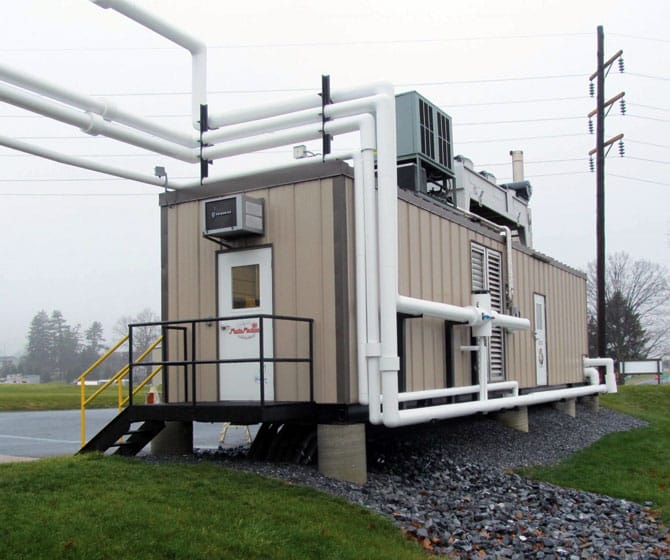 An average of 153 scfm of biogas is produced, which passes through an iron sponge scrubber to remove hydrogen sulfide. Conditioned biogas is sent to the Martin Energy genset with a 710 kW Guascor engine. The first kWh was generated on May 3, 2012. By early August of that year, Kline’s had reached the first one million (1,000,000) kWh of electric production. Enough electricity is generated on a daily basis to power the entire Kline’s campus as well as an additional 450 homes. Excess heat from the genset is captured and used to maintain the digester temperature at a steady 98°F.

Martin Energy Group provided the following components for this system:

Martin Energy Group continues to service and maintain the engine and other equipment, including the Martin controls system.

Martin Energy Group is still involved as consultant for design and upgrades.