When Martin Construction Resource designed the project for Reinford Dairy, the farm had fewer than 500 cows. They had plans for expansion and requested a complete mix system design, sized for a 1,000+ herd count, parlor water, sprinkler water, and 30% extra volume for food waste.

The digester system has been so successful and profitable that 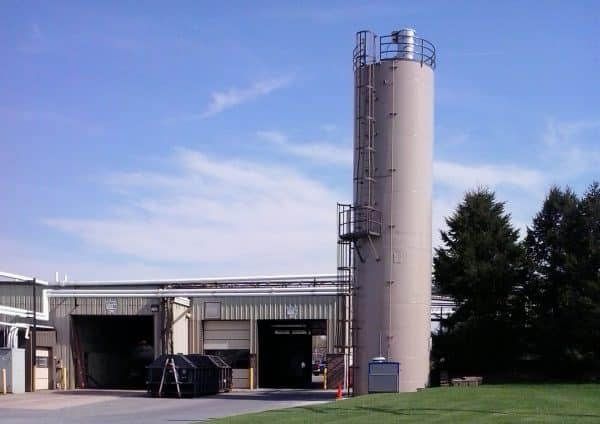 the farm did not expand its herd as planned, but for years has instead used the extra digester capacity to accommodate food waste. As an added benefit, the odorless digester effluent allows the farm to implement “no-till” land practices on their acreages.

The farm receives an average of 16 tons per day of landfill-diverted organics (see photo). At times they have received as much as 32 tons per day. Steve Reinford has stated to Martin Construction Resource that he can run his system at maximum capacity from start to finish (including engine operation and maintenance) with only one or two full-time employees.

The digester, commissioned in 2008, inspired their son to build a larger digester at his own farm (Reinford-Frymoyer Farm) several years later. Both of the digesters have greatly reduced manure odors for their respective farms, Besides, they have significantly lowered energy costs, provided additional revenue streams, and improved the health of their herds. The complete-mix anaerobic digester on the Reinford-Frymoyer farm manages about 210,000 gallons per month of manure, about 20,000 gallons per month of grease trap waste, and about 110 tons per month of food waste.